Our Most Stupid Mistake Ever, cont.

This is a long story, so I will continue where I left off.  I didn’t mean to make it sound like a cliff hanger last time.  Some of you seemed concerned as to whether or not we have survived or what happened next.  It really is quite a boring story, drawn out with lots of whining and gnashing of teeth.  I will leave out all those details, but I do want to share a few more with you.  I had someone suggest that I write a saga, kind of like the Pioneer Women did with Marlboro man.  But don’t worry, I won’t drag it out that long and I certainly don’t have her gift of gab or her flair for the dramatic.  So, I will only drag it out for  two more posts.  Today’s will show you a few pictures taken during the remodeling.  I will show some of the after pictures too, but I have been teaching all weekend, now I’m home for a few hours and then leave this afternoon to teach at another retreat.  I’m a little pressed for time and won’t have a chance to go around and take some photos in the house.  I’m sure when I get back  I’ll be playing catch up for a bit, but I promise I will get around to it sometime soon!   In the meantime . . . .

After living in the house for two years, we decided we really missed having an attached garage.  We decided to do an addition with a garage and studio space above.  It was the best thing we have done for this house!  Joel would like you to notice the green swatches painted on the lower right corner of the house and on the garage.  I was “auditioning” different paint colors on our house, much the same way I audition different border choices on my quilts!

Sorry, but this is a pre-digital camera shot.  Joel’s Dad is a masonry contractor and Joel used to work for him.  Here they are pouring the footings for our garage addition.

This shot shows another thing we decided to change about the house, after living with it for a while.  We had the windows, trim, carpet, wood floors, fireplace, etc done and then decided we couldn’t live with the ceiling.  We sucked out all the insulation and tore down all the sheet rock.  What a mess!!  But it seemed the more we fixed, the worse the other things that we hadn’t done looked. 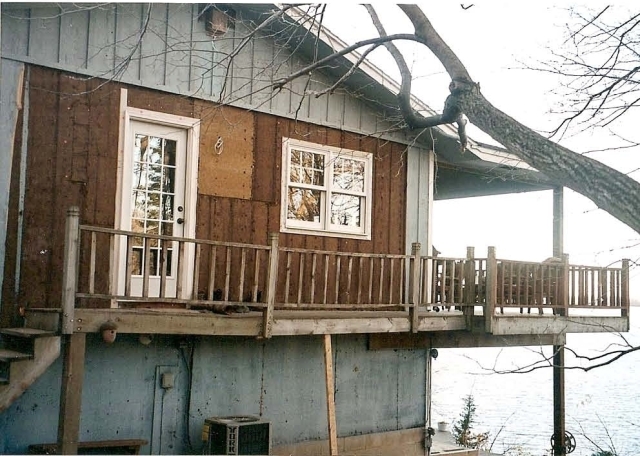 Here’s another pre-ditigal camera shot.  This shows the condition of the outside of the house.  The former owner was in the process of residing the house.  He hadn’t gotten very far.  That’s okay, because we were just going to tear it off anyways!  We were in the process of replacing the windows.  Notice the extra board we had put in to help support the deck.  The deck was in horrible shape.  Anytime someone came over, I had to warn them not to lean on the deck railing.  It was so rotten, I don’t think it would have held much.  This is what we found when we replaced that window:

This shot shows a dead squirrel that we found in one of the walls in the living room.  This was just one of many dead  creatures that were sharing the house with the former owners.  In fact, when we were tearing down the ceilings in the basement, a mouse skeleton landed on my head.  The first week we were living in the house, I discovered we had mice when I saw these little things that looked like wild rice in my white silverware drawer.  Well, it wasn’t wild rice.  It was so gross and I felt like I’d never get the house or myself clean again!  I think that this house, like so may others around the area lakes, used to be a cabin.  I don’t think that these cabins were finished quite like they should  be and thank goodness for building codes!  (By the way, we brought everything up to code!)

Joel and I can laugh about this picture now, but this wasn’t so funny when it happened.  We have a split entry and didn’t have any railing on the steps for about 5 months.  We were working on the upstairs bathroom and Joel was carrying the old toilet down the steps.  He tripped over a box of quilt patterns on the steps and the toilet went flying.  It landed part way down the steps, continued to roll down, bounce off the front door, then turn the corner and go down the rest of the steps.  It crashed onto the concrete floor in the basement below.  It was almost as if that old toilet had mind of it’s own.  I don’t need to explain what he’s cleaning up, right?

Here’s another shot of Joel pouring some more concrete.  This is about 3 years into the project and we finally had steps up to the front door.  We’re getting there!

Now, these are just a few of many pictures that I could show you of what we went through.  So I know of you are wondering – What were we thinking?  Why in the world did you buy this house?  Did you have a vision all planned out for this house?  All I can say is, I don’t know what we were thinking.   At that time I thought remodeling was a fun challenge, but I didn’t realize remodeling on this scale was pretty much torture.  I really had no vision for the house when we started, it just sort of evolved as we went along.   I can show you something that helped steer us toward buying this house.  It looks something like this: 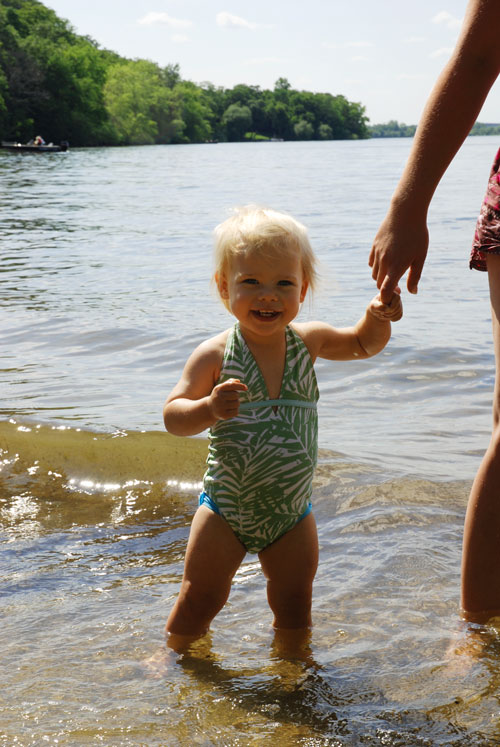 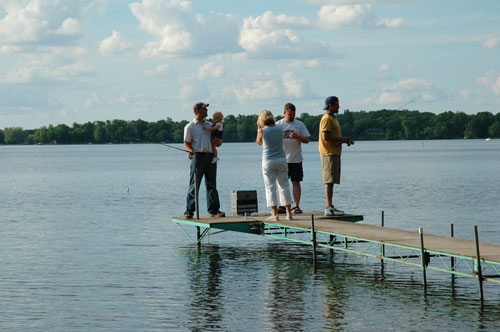 Okay, I better stop now.  Can you tell that I am REALLY sick of winter?  I am just craving summer and nice weather!

Quilt pattern designer
View all posts by Heather Peterson →
This entry was posted in Quilting. Bookmark the permalink.

21 Responses to Our Most Stupid Mistake Ever, cont.