Posted on December 12, 2011 by Heather Peterson

I have a couple of things to share about today – Things that have brought some joy to me over the last week or so.  The first being a newish Christmas quilt that I finished.  I say newish, because as you can see in the photo below, there is green grass in this picture.  The other pictures that are further below in this post show snow and ice, which is more accurate to December in Minnesota.

I finished the quilt earlier in the year, but forgot to blog about it.  As I have been unpacking and displaying all of my Christmas quilts around the house, I was reminded that I have yet to share about this one.  The fabric is Jovial by Basic Grey and I love the colors and prints.  In fact, I have made a Christmas quilt from the Basic Grey Christmas lines the last three years and they are always a favorite.  I added the cream and black dot, which is from my last Christmas line.  The pattern is called Simple Gifts and is yet another from my “Living Large 2” book.  (You are probably getting sick of this book by now, so I promise that my next quilt will be from another book :-). ) 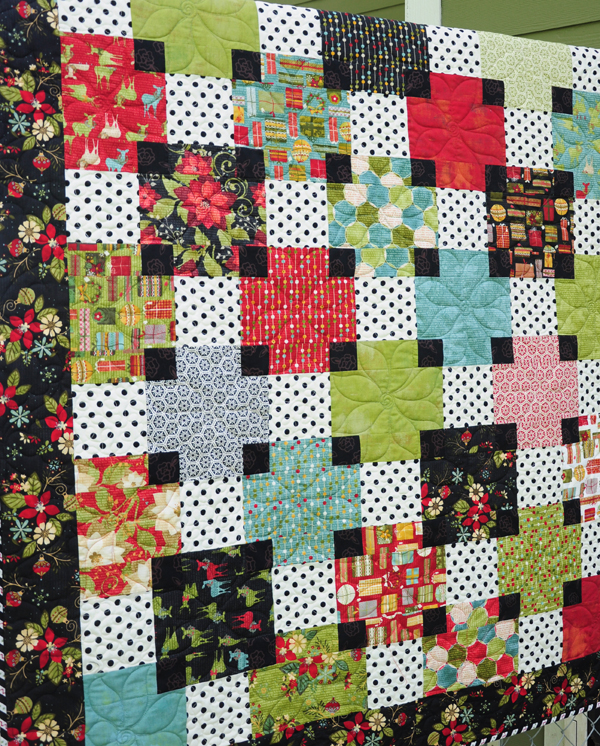 I love making Christmas quilts and add another one or two to my stash each year.  Many of them are left up for several months, as I find that January 1st, is just to quick to say good-bye to some Christmas decorations.  Eventually, there will be one in each room, but I have a few years to go yet!  If you want to check out some of my other Christmas quilts, you can click here.

The second thing that I have enjoyed in the last week was an afternoon spent ice skating on a local lake.

Many of the lakes have just frozen over in the last week, so it is was just perfect for ice skating.  Just to give you an idea of how perfect the ice is, in this next picture, you can see that the ice looks like a sheet of glass (which is also perfect for this guy with his ice-glider thingy).

In the past 10 years, we have only had two times where the ice has frozen on a calm night.  That, in conjunction with the fact that we have had little snow and it was pretty warm out, made for ice skating perfection!   It was too perfect an opportunity to let pass, so Joel and I called up the local nieces and nephews to join us.  It was the first time out on the ice for all of them, including my oldest niece Bella.  She took to it like a natural and went up and down the shore with me.

My other niece Addi will be four shortly, and she gave it a try too.  If you look closely, you can see her double blades, which helps keep such a little one on her feet.  If you look closely below her feet, you can see how clear the ice is.  You could easily see all the sand and rocks on the bottom.  It was so clear, that all the little kids were freaked out to walk on itt.  After a little coaxing, they warmed up.

For the kids that were two little for skates, they ran around in their boots or got chair rides from Uncle Jed.  The chairs are really helpful for getting your skates on, but way more fun for sliding!

The littlest ones even came out on the lake in the stroller, which isn’t something you see everyday.

When the kids weren’t busy skating, they were busy exploring the lake bottom.  We saw a few fish and even a few muskrats swimming under the ice – we could see every fish bubble and muskrat claw.

Really, who needs a big screen TV when you have this? 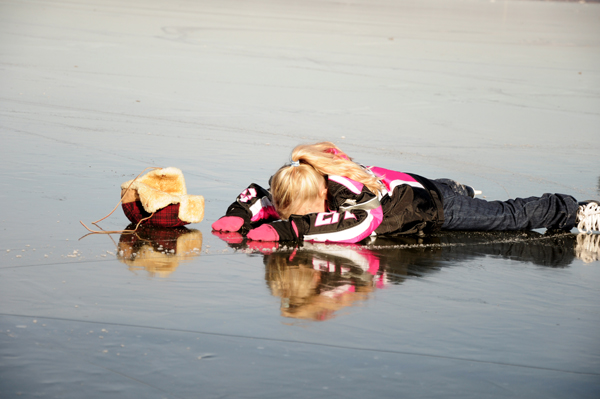 I have to admit that I was a little worried that the one of the kids would get hurt, but I guess I should have been worried about my hubby instead.  After catching his blade on a crack, he tried to stop his fall with an eyebrow.  Not on purpose of course, but on ice these things can happen really fast.

This brought an end to his skating and resulted in 8 stitches.  We have decided that if the kids can skate as fast as Joel can, they will need to be wearing a helmet.

Despite the stitches, we had a great time (even Joel).  We hope the kids made some good memories too.  We can’t wait to do it again some time soon.  If you are in the area, you should try it too!  (don’t let those stitches stop you)

PS – Later that evening, when Joel and I were reminiscing about the day, he said that it would have been so cool if I would have gotten pictures of him falling to use on the blog.  I admitted that while he was seeing stars, I had snapped a few pictures.  He was a little dissapointed that it didn’t show any blood, but I figured this was already brutal enough.