It’s such a relief to have all the quilt market deadlines behind me.  And while many other designers are packing or arriving at quilt market, doing schoolhouse sessions, or preparing for Sample Spree tonight, I am home, breathing a sigh of relief.  All the deadlines are over for a little while and I am leisurely making a table runner for my bedroom.  I don’t remember the last time I did that!  Carter is just finishing up his nap, so I won’t get it finished today, but that’s okay.  He is switching himself from taking two long naps a day to one shorter one.  He seems to be adjusting to it just fine – it’s me that is having issues!  I really got a lot done during those naps.  He isn’t crabby about it at all, just as busy and happy as ever.  It’s not like I don’t want to be with him more, I just like to give him lots of attention while he is up and not have to sit at the computer, sewing machine, etc.  I love his timing though – he waited until I was done with my deadlines to switch up my schedule!

Over the last few months or so, I have been trying to finish up a bunch of unfinished projects.  Several are knitting projects that have been on the needles for quite a while.  I think this first project has been going for about a year.  I am so glad to finally have it finished!  (that goofy expression on my face might have something to do with my annoyance over how long this took me). 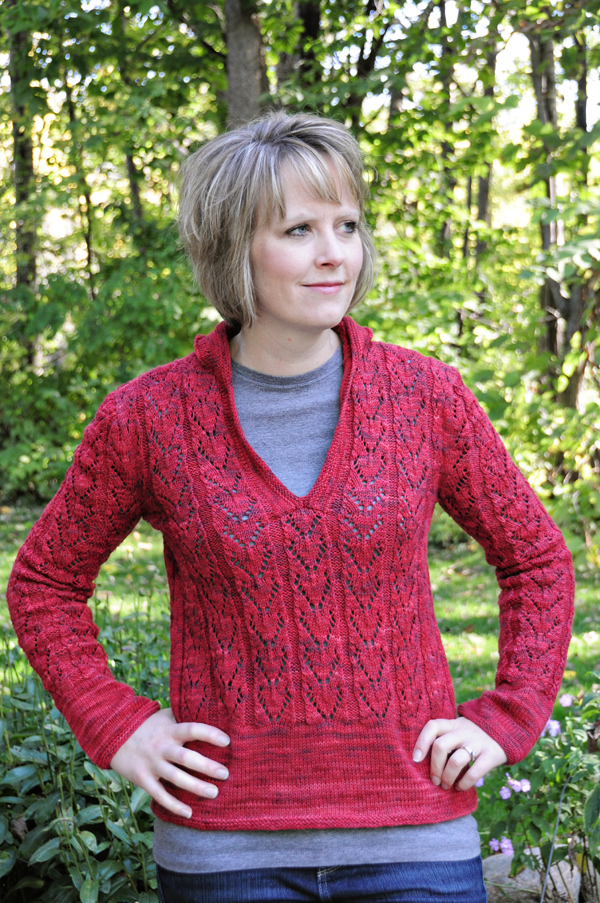 The yarn is something I have used twice before and I liked it in this project as well.  It’s called Dream in Color Smooshy.  The color is Lipstick Lava.

It’s hand-dyed which makes for a nice depth of color, with slight variations.  I much prefer the weight of the Smooshy to the DIC Classy.  In my experience, it blocks much better and isn’t quite as stiff.

The pattern is called  Chambourcin – designed by Ruth Garcia-Alcantud of Rock and Purl.  I think the only mod I did was to make the hood a bit smaller.  (To keep the pattern symmetrical, it ended up a bit smaller than I would like, but that is still better than a giant hood. )  I do love a nice hooded pullover! 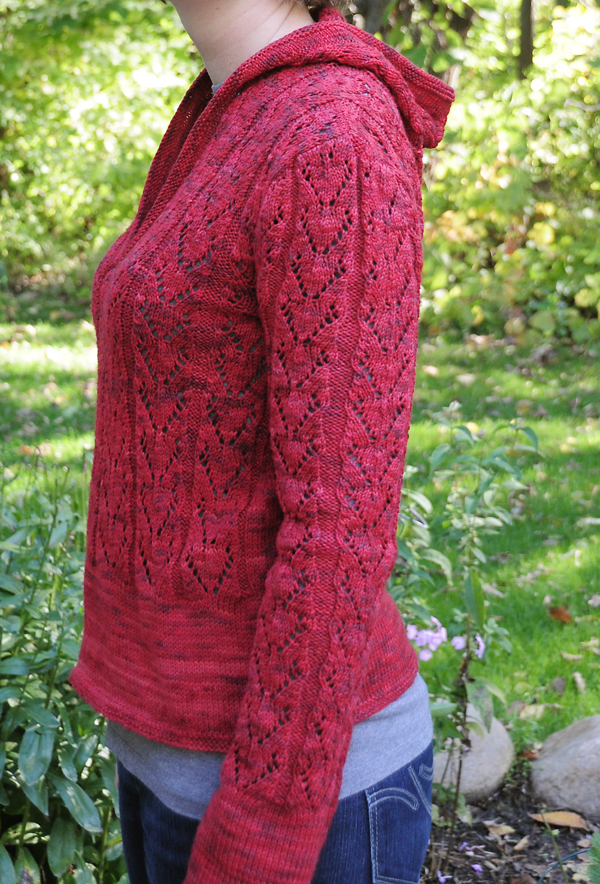 You can find my Ravelry link to the project here. 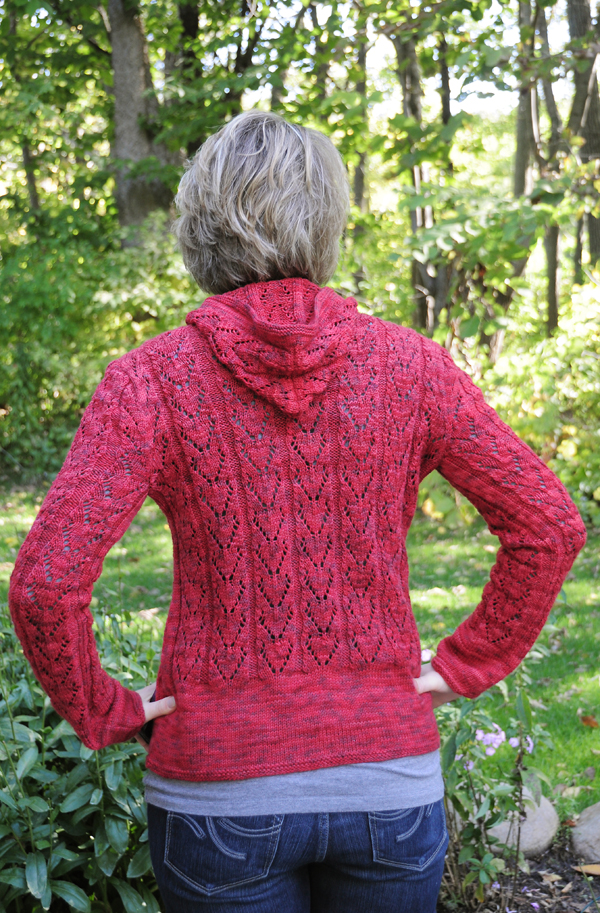 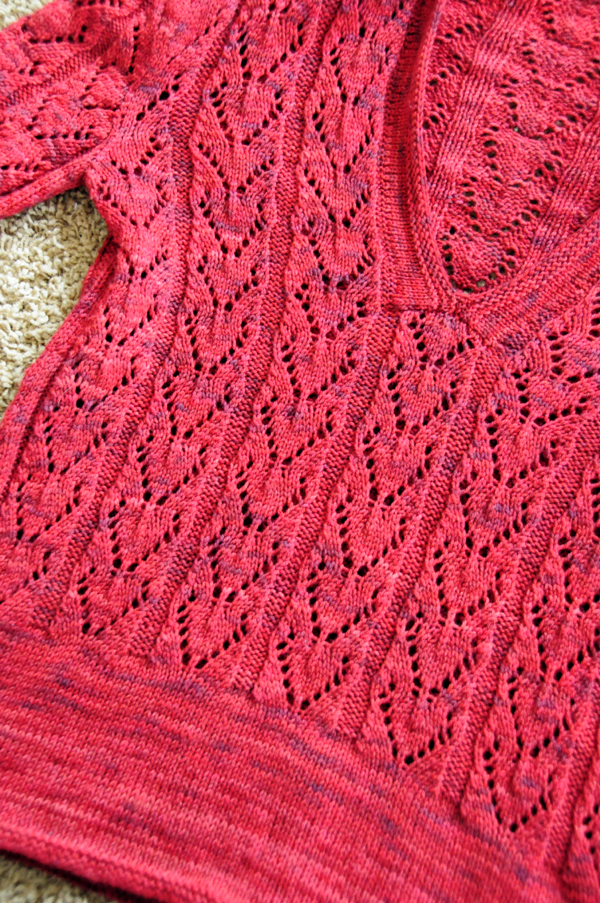 My next project went a little quicker.  I started with this yarn –

Madeline Tosh DK, in the color Bloomsbury.  It’s a beautiful soft blue.  The pattern is White Russian by Thea Colman of Baby Cocktails.  The pattern is top down, in the round, which makes finishing it so much easier. 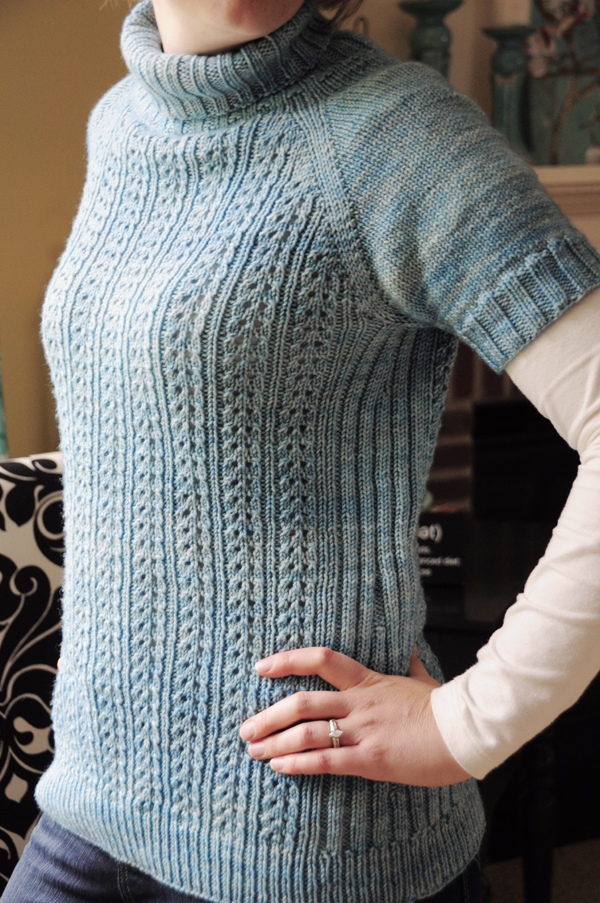 After getting this far, I decided that I got it a little too long so I pulled the hem out and redid it. 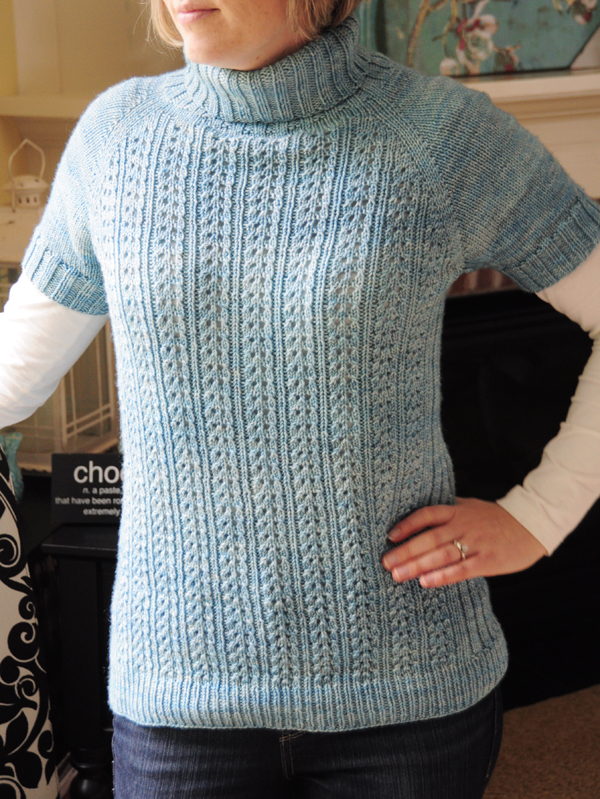 That also gave me a chance to add a little detail that I forgot the first time around – the buttons at the bottom hem.

I wanted to talk a little bit about the in-the-round concept.  It has its pros and cons, but I have to say the biggest con is that the patterns are usually written so that the front and back are the same size.  In other words, you usually end up with a lower neck in the back, or a higher neck in the front.  This one has the higher neck in the front.  That results in a little bunch of excess fabric gathering at the front of the neck.  You can see it a bit in the picture below, but also in the first two pictures.  In the future, I want to remember to adapt the patterns to include some short-row shaping so that there are a few extra rows to the back.  Has anyone else tried this?  I don’t see why it wouldn’t work.

My favorite thing about patterns that are in the round, is that they usually have Raglan sleeves.  I just love the lines – it makes for a much prettier sleeve.

You can find my Ravelry link for this project here.