Posted on December 7, 2016 by Heather Peterson

Earlier this year I started a whale quilt for my oldest son.  His favorite show is Octonauts and he loves learning about ocean creatures.  So, when I saw the Preppy the Whale pattern by Elizabeth Hartman, I wanted to make it for him. 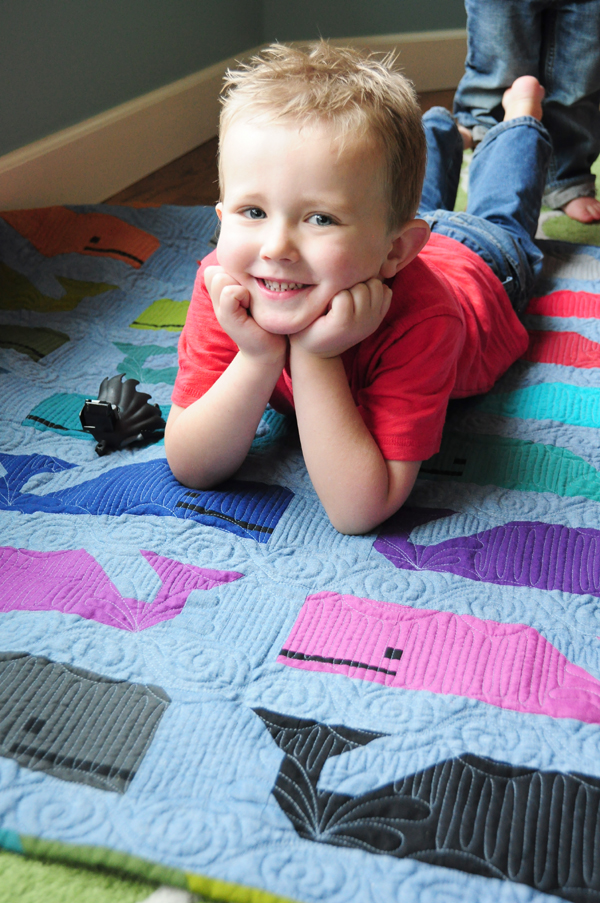 I just used fabrics from my stash, so my colors aren’t as cute as hers, but he still likes it.  I had leftovers from a bundle of Moda’s Mochi Linens, so I wanted to use them up.  You know how that is . . . .

I had some fun machine quilting this one.  It looks complicated, but it’s actually quite simple.

I started with a simple wave in the horizontal sashing.

After all the waves and echoes were done, I added the filler in between.  (The little one thinks the quilt is his too, so luckily big brother is willing to share.)

Lastly, I used my scraps to make rainbow binding.  I carefully calculated my math so I used each color from the quilt twice, in the order that I used it in the quilt.   It didn’t go quite how I had planned – as I must have been slightly off with my number and had to insert one more piece found in my stash.

This was a very fun quilt to make.  There were lots of tiny pieces to cut, so I was happy to be done with the cutting.  It was smooth sailing after that.  Having little boys is a fun excuse to be able to make quilts I normally wouldn’t.  A whale quilt doesn’t go with the décor in my main living area (it would be perfect for an ocean side beach house), but it sure is cute in a boys room.  . . . .

26 Responses to Preppy the Whale