How to Bind Inside Corners – Plus a Give-away to Practice Your Skills!

I still have a one new thing from Quilt Market that I haven’t shared yet.  It’s a large single pattern called Simply Sixties.  It uses the same angle, ruler and concept as the Sizzlin’ Sixties book, but it’s designed with large scale prints in mind.  The pieces are quite large, so it really shows off the fabric.  The larger pieces also make it easier to assemble, so it’s great for the advanced beginners that wants to try out the 60-degree angle, but feel that they aren’t quite ready for the smaller pieces in Sizzlin’ Sixties. 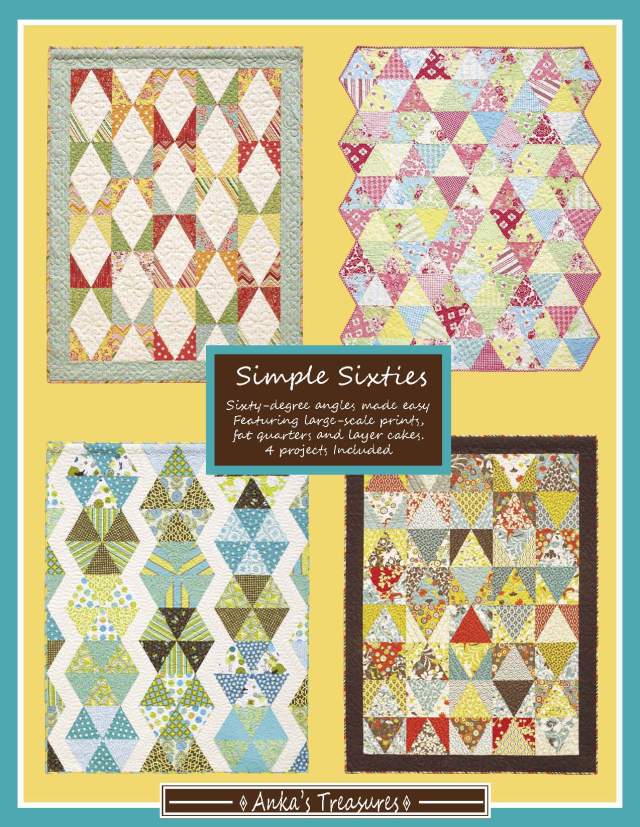 The pattern is fat quarter friendly, but the quilts in the upper left and lower right hand corner can also be made from Layer Cakes.  I have what could be considered a large stash of Layer Cakes and it only takes a hour or so to make those blocks, so I plan to make quite a few of these! 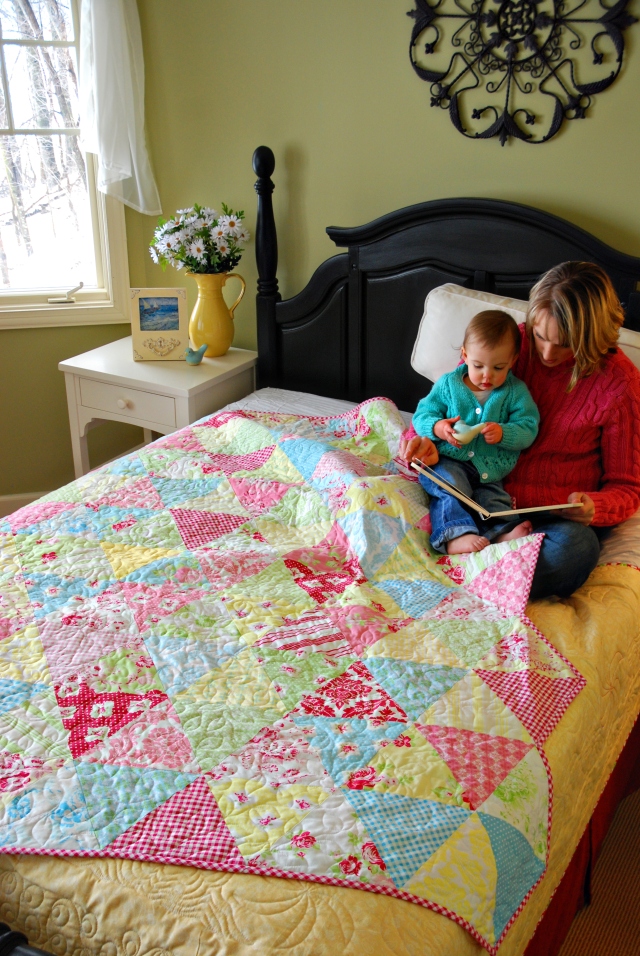 Which brings me to my point for today’s post.   How do I bind those inside corners?  I think everybody pretty much knows how to do the corners on a typical quilt (outside 90-degree corner), but I gets lots of e-mails anytime I change up the angle a little bit.  It’s really nothing to worry about.  It’s actually quite easy.  Don’t believe me?  I’ll guess I’ll just have to prove it!

I have been working on binding a topper over the weekend, so I will use this one as my demo. 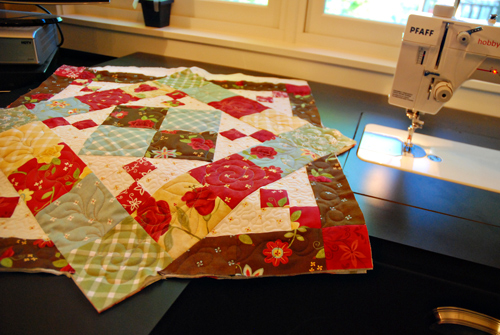 The angle isn’t quite the same as the quilt shown above, but the concept is the same, so it doesn’t matter.

Step 1.  Make a small snip into the quilt, right in the middle of that inside angle.  That snip will allow you to pull the side of the quilt straight .  See?  That’s what makes this technique SO easy!  It’s pretty much like sewing binding to a typical straight side of a quilt – you really just sew straight, but the steps below will show you how to “finagle” the quilt as you do this.

If you prefer not to trim your batting and backing before adding the binding by machine (like I did in the photo above), your quilt will look something like this – 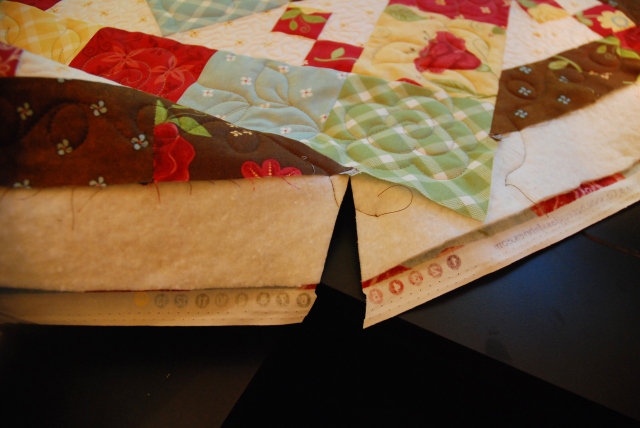 Are you with me so far?

Step 2.  Start sewing on the binding with your machine.

Step 3.  Sew into that inside corner and stop with your needle down. 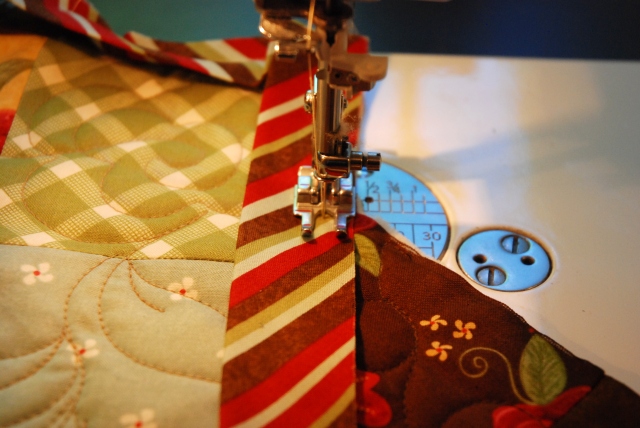 The stopping point is where the 1/4″ seams would interesect at that inside corner.  It’s probably easier to see on the back of the topper, as shown here.

Step 4. With the needle still down, pick up your presser foot and turn the quilt so you are ready to sew down the next side.

Step 5.  With your left hand, pull the back corner of the quilt as shown.  The snip made earlier will allow you to pull the quilt straight like this.

Step 6.  Now pull the binding strip into place, along the edge of the quilt and continue sewing.  It’s as easy as that!

This is how that corner will look after the sewing is done  –  At this point in this process, there isn’t a miter in the corner and the binding will stand straight up.  The miter will be done in the next steps as the hand-stitching is done.  To see my tutorial on hand stitching binding, click here.

Step 7.  Hand stitch as shown in tutorial above.  Before you get to that inside corner, flip the quilt over and pin the miter in place from the front side of the quilt as shown.

Step 8.  Turn the quilt back over and stitch to the corner as shown.  Notice how the pin is still in the front side of the miter, holding everthing in place while you are stitching. 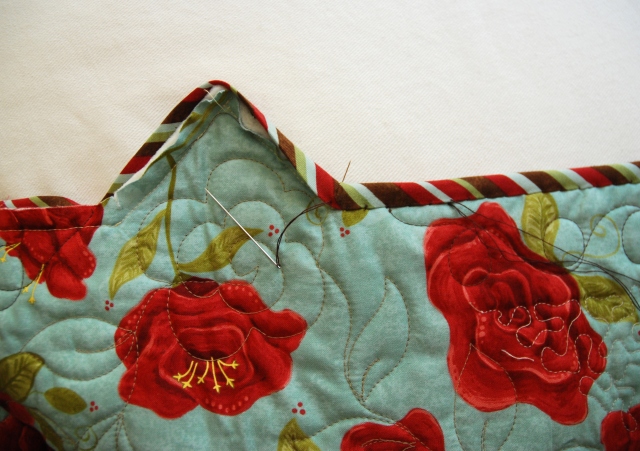 Step 9 – Bring the needle up inside the point and do a couple of tacking stitches so that the miter doesn’t pull out after the pin is removed. 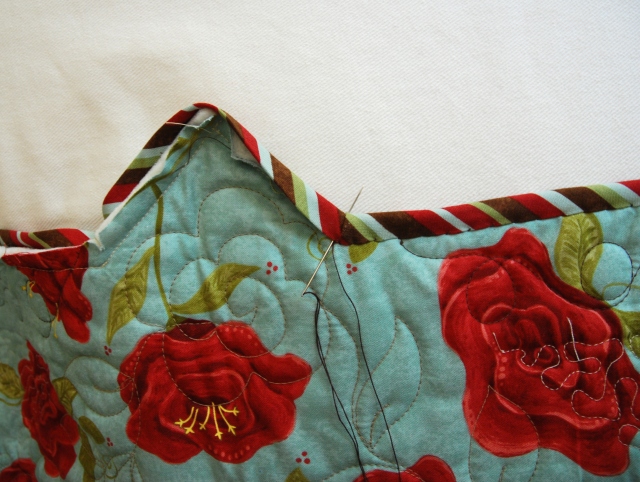 To practice your technique, I’m having a give-away  – 3 to be exact.!!!  The give-away will include the Simply Sixties pattern: 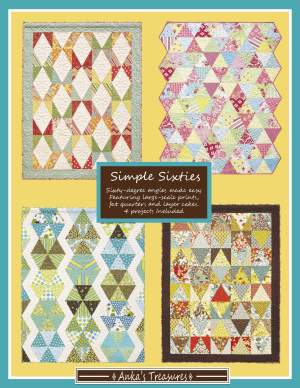 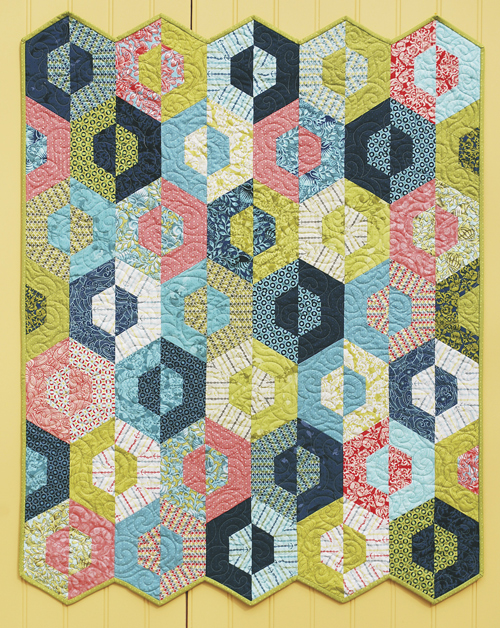 Can you tell I really want you to try this technique?  To enter, just leave me a comment and I will randomly select the winners next week.  Just PLEASE try it.  It’s really fun and easy to think outside the box 90-degree corner!

342 Responses to How to Bind Inside Corners – Plus a Give-away to Practice Your Skills!