I have been debating about writing this post for the last several days.

It’s not something I wanted to share, but many of you know our dog Daisy.  Joel and I have talked about it and decided to share.  Partly because we also wanted to warn people about a risk for their dogs, and because you may wonder why we don’t blog any new pictures of Daisy.

Wednesday afternoon, Joel let Daisy out for a bathroom break.  She didn’t come right back, even after calling her.  Joel went out to look for her, as this wasn’t typical behavior for her.  After driving around the neighborhood for a while, he came back home without her.  He walked around our yard calling for her and realized that there were some terrible noises coming from the neighbor’s yard.  He followed the sound and found Daisy caught in a large trap.  He tried to get her released, but those traps aren’t meant to be opened by a person with no knowledge about opening them.  He had to go for help.  He knew her jaw was broken, but wasn’t sure about her neck.  The vet clinic happens to be a couple of minutes from our house, so they were able to come and help.  They sedated her and began to work on getting the trap off.   It took all three of them, and a lot of adrenaline on Joel’s part, to get the trap off  her head.  Once she was loose, they brought her to the vet clinic for x-rays.  The x-rays revealed the worst – that her neck was also broken.   They put her to sleep and Joel is having her cremated.  He plans to spread her ashes at their favorite hunting spots – in North Dakota and at his buddy’s land down by Prinsburg.

Daisy was a special dog.  According to Joel, she was the best hunting dog he ever had, and more importantly, an even better pet.  She had a really good disposition – so friendly and personable.  Daisy was an important part of our family, and watching Carter play with her was so fun.  He would squeal with delight when he got to pet her.  We are dissapointed that he will not get to grows up with her.  Her absence leave an empty void in our home and in Joel’s life.  A good friend of Joel’s nicknamed her “The Love Machine”  because she loved people, receiving affection from people and giving it.  In fact, she gave pretty good hugs! 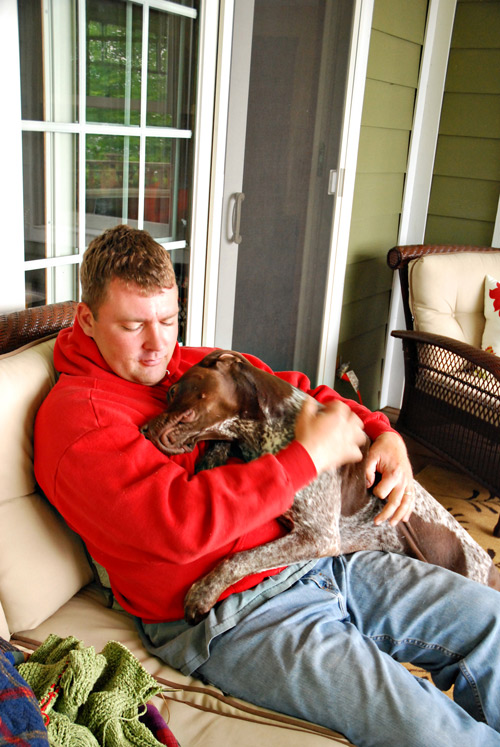 One of my favorite blog posts happens to be about Daisy.  You can click here if you want to read it.  The photos will tell you more about her personality than my words ever could.  She was also a good hunter and she and Joel shared a special bond because of their mutual love of hunting.   Another one of my favorite posts includes Daisy and gives you a little glimpse into her favorite hobby – pheasant hunting.

But, no matter how special we happen to think she was, or if she had been a random, homeless dog, she never should have had to suffer so.  We both feel terrible that she was in that trap for over an hour.   The trap is called a Connibear 200.  They are legal to use in some states, including Minnesota.  But, we were told they are not currently legal to use in Minnesota right now, because it is not trapping season.  They are legal to use on public hunting land and do not require a special marking so that you know they are there.  They are designed to kill small animals quickly, unlike the old leg traps that an animal could live in for quite some time.    It has become an issue of concern for many people, because of how many dogs are killed in these traps.

If you are like us, and hike or snowshoe on public hunting land or other state lands where trapping is legal, you need to know about these traps.  We have since found out that there is a special technique for releasing the trap.  If you are interested, you can read about it on this website.   (Some of the websites showing how to release your dog are pretty graphic — just an FYI.)  Hopefully you will never need to use it, but you never know.   From what Joel has read, you have to know how to release them quickly if you want to save your dog.

I don’t mean to be a pot stirrer with this post, as I know it’s a controversial issue.  We just wanted other dog owners to be aware of the risk.  If this happens to your dog and you can release them quickly, you might have a chance of saving your dog.

Sorry to be the bearer of bad news.  On the brighter note, we are grateful that Carter, or any other child, wasn’t the one to find the trap.

Many of you have said such nice things about Daisy in the past and we have so enjoyed reading your comments.  I know many of my readers are dog lovers and your words will be an encouragement right now, especially to Joel.

Good-bye Daisy.  You will be missed!

Quilt pattern designer
View all posts by Heather Peterson →
This entry was posted in Family and tagged connibear traps, Daisy. Bookmark the permalink.